Alopecia is a medical term for hair loss that leaves the skin partially or totally naked. Baldness, or androgenetic alopecia, is the most common form of alopecia. It affects mostly men. It is a natural phenomenon strongly determined by heredity. Other forms of alopecia can reveal a health problem or be caused by taking medication.

In Greek, apex means “fox”. Alopecia thus reminds us of the important loss of hairs that the fox undergoes each year, in the beginning of spring. However, Some people choose to undertake treatments in order to stimulate regrowth or limit the fall. Since hair is culturally associated with seductivity, health and vitality, the treatment of alopecia is of great interest. However, it should be noted that the result is not always satisfactory. Hair transplant can then be the most guaranteed and permanent resort. 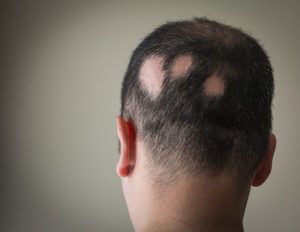 Here are the main forms of alopecia and their causes. Even though alopecia mainly affects the hair, it can manifest on any hairy area of ​​the body.

Baldness or alopecia androgenetic: About one-third of Caucasian men have baldness at age 30, half at age 50, and about 80% at age 70. In men, baldness is characterized by a gradual recession of hair in the temples and forehead. Baldness can begin as early as the end of adolescence;
Women are less likely to suffer from baldness. At the age of 30, it affects between 2% and 5% of women, and nearly 40% at the age of 70. Female baldness has a different appearance: the whole of the hair from the top of the skull becomes increasingly sparse. Although it is often reported that hair loss tends to increase from menopause, this is not evident in the epidemiological studies conducted so far.

Cicatricial alopecia:  Alopecia can be caused by a permanent lesion of the scalp due to a disease or infection of the skin (lupus, psoriasis, lichen planus, etc.). Inflammatory reactions that occur in the skin can destroy the hair follicles. Ringworm, a fungal infection of the scalp, is the most common cause of alopecia in children. However, in most cases, there is regrowth.

Alopecia areata, or alopecia, is an autoimmune disease. It is recognized by the complete fall of hair or hair on small areas of skin. There is sometimes regrowth, but a relapse is always possible months or years later. Alopecia areata (loss of all body hair) is very rare.
Telogen effluvium: It is a sudden and temporary fall of hair, as a result of physical or emotional shock, pregnancy, surgery, weight loss, high fever, Etc. Up to 30% of the hair enters prematurely in the rest phase, then fall. Once the stress has passed, the hair follicles return to the active phase. This may take a few months;
Congenital alopecia: Very rare, it can be due in particular to the absence of hair roots or to an anomaly of the stem of the hair. Mutations on the P2RY5 gene are responsible for one of these hereditary forms called hypotrichosis simplex, which begins in childhood in both sexes. This gene would participate in the formation of a receptor that plays a role in hair growth;
Drugs, chemotherapy, etc. Different situations can trigger hair loss. For example, nutritional deficiencies, imbalance of the hormonal system, chemotherapy or radiotherapy treatments to treat cancer, medications (eg, warfarin, anticoagulant, or lithium, used in the treatment of bipolar disorder).

Expert Hair Transplant We challenge you to find a clinic that produces life-changing results this good!

UPLOAD YOUR PICTURES FOR
ADVANCED CONSULTATION